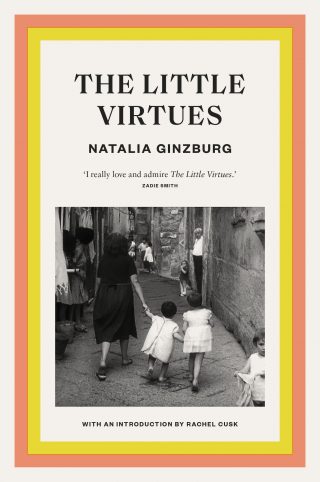 with an introduction by Rachel Cusk

Translated from Italian by Dick Davis

‘As far as the education of children is concerned I think they should be taught not the little virtues but the great ones.’

Between 1944 and 1960, Natalia Ginzburg wrote The Little Virtues, a collection of eleven vivid portraits of life that are central to her legacy as one of the greatest Italian writers of the twentieth century. From the Italian countryside, where she and her husband lived in exile under fascist rule, to the melancholy streets of 1960s London, Ginzburg explores loneliness and belonging against the backdrop of post-war Europe.

In The Little Virtues, Ginzburg takes familiar objects and experiences – worn-out shoes, money boxes, meatballs, childhood, silence – and transforms them into subjects of great significance. While haunted by the political events of the time, Ginzburg rests her gaze on the human intimacies that shape and define our lives: friendships, marriage and parenthood. She describes her longest relationship – with her writing – in a definitive piece on vocation and motherhood, while her groundbreaking essay on raising children remains as vital as the day it was written.

The Little Virtues is a poignant portrait of Italy in the twentieth century and a singular work of memoir: intrepid, wise and dazzling.

‘The [new calm] led me to pull Natalia Ginzburg down from the shelf; I felt a sudden need to reread “Winter in the Abruzzi,” an essay I consider one of the most perfect and devastating ever written.’ – Maggie Nelson, The New Yorker

‘I really love and admire The Little Virtues.’ – Zadie Smith

‘The book that taught me what I want to teach my daughter.’ – Belle Boggs, The New Yorker

‘A glowing light of modern Italian literature… As direct and clean as if it were carved in stone, it yet speaks thoughts of the heart.’ – The New York Times Book Review

‘This reissue of a 20th century classic contains 11 essays of wisdom that’ll leave you seeing the world from a new perspective.’ – Emerald Street