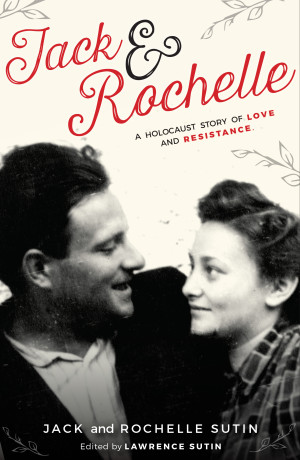 A Holocaust Story of Love and Resistance

by Jack and Rochelle Sutinedited by Lawrence Sutin

In this gripping and heartfelt memoir, Jack and Rochelle Sutin recount how they fell in love during the height of World War II in the dense forests of Poland.

Though they grew up in the same village, Jack and Rochelle only knew each other at a distance having once shared a clumsy school dance. After the Nazi occupation, they were torn from their families and forced to live in labour camps. Each managed a daring escape into the surrounding forest, where they happened upon each other and, along with thousands of others, banded together to join the Polish underground resistance.

Jack and Rochelle’s poignant shared narrative reveals the extreme conditions they endured while living for years in an underground bunker in the woods, and the impossible love affair that grew out of it and lasted over fifty years. More than an account of stark survival, this is an inspirational story of courage, resilience, and, above all, true love.

Lawrence Sutin, the editor of Jack and Rochelle, is the author of numerous works including A Postcard Memoir and the critically acclaimed All Is Change: The Two-Thousand Year Journey of Buddhism to the West. He lives in Minneapolis, and currently teaches at Hamline University.

‘Captures the horror of the Holocaust without missing the central characters’ strength, courage, and passion.’ – USA Today