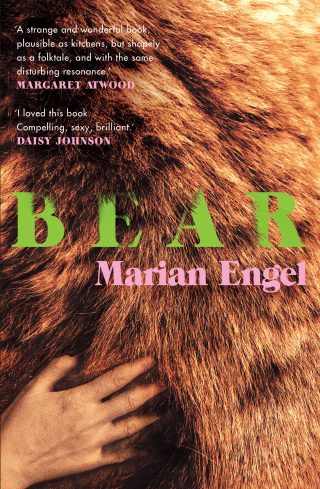 ‘A strange and wonderful book, plausible as kitchens, but shapely as a folktale, and with the same disturbing resonance.’ – Margaret Atwood

Lou is a shy and diligent librarian at the local Heritage Institute. She lives a mole-like existence, buried among maps and manuscripts in her dusty basement office. With nothing and no one to go home to, she resigns herself to passionless sex on her desk with the Institute’s Director.

When she is summoned to a remote island to inventory the house and estate of the late Colonel Jocelyn Cary, she takes it as an opportunity to head north and get out of the city, hoping for an industrious summer of cataloguing.

Colonel Cary left many possessions behind, but no one warned her about the bear. Lou soon begins to anticipate the bear’s needs for food and company. But as summer blooms across the island and Lou shakes off the city, she realises the bear might satisfy some needs of her own.

‘A bizarre but strangely uplifting book about a woman’s quest for freedom . . . the perfect escapist yet intellectual read.’ – The Times

‘The book has the shape of a fable, but the soul of a real encounter.’ – Patricia Lockwood, London Review of Books

‘This enchanting, singular book still feels as fresh and exciting today as it surely did nearly half a century ago… A sexy masterpiece.’ – Telegraph

‘This droll, sensual tale is as strange and powerful as myth.’ – Observer

‘Delightfully ambiguous… an acute evocation of human projections on to land and nature.’ – Katherine Angel, Guardian

‘A love story with a bear sounds bizarre, incredible, perverse even – but you suspend disbelief throughout this odd, tender novel, a story which burrows under your skin.’ – Irish Times

‘This human-bear love story is a forgotten feminist gem.’ – i paper

‘A surrealist story which draws you in slowly, with the fantasy of a Guillermo del Toro film and the grinning darkness of an Ottessa Moshfegh novel.’ – Esquire

‘Engel’s tightly-focused, novella-length fable has lost none of its power, the issues it addresses of appropriation and indigenous culture still no closer to being resolved.’ – The Herald

‘A deliciously weird tale about an unconventional love affair and the perils of solitude.’ – The Scotsman

‘Bear is a taut, spry book, and greatly merits its 1976 win of the Governor General’s Literary Award.’ – The London Magazine

‘A wild, charming, funny and odd book, half folktale but totally grounded in reality too. I love to read a book and be totally mystified how the author pulls off that delicate balance.’ – Megan Nolan, author of Acts of Desperation

‘Sure to be a topic of wild conversation upon its reissue.’ – i-D

‘The best Canadian novel of all time.’ – The National Post

‘Pure magic… an alchemic transformation from fact into folk tale and the rich areas of the human psyche, a metamorphosis so subtle that its sexual shock is completely acceptable to us.’ – New York Times

‘The most controversial novel ever written in Canada.’ – Canadian Encyclopedia

‘Fascinating and profound, this novel speaks of a woman’s strange (some would say bizarre) and moving journey toward inner freedom and strength, and ultimately toward a sense of communion with all living creatures.’ – Margaret Laurence