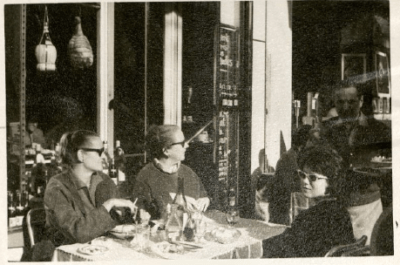 In Map of Another Town M.F.K. Fisher gives us a compelling portrait of a place – the ancient town of Aix-en-Provence – and an intimate self portrait too. Read on for an extract from the book’s beginning:

So here is the town, founded more than two thousand years ago by the brash Roman invaders, on much older ruins which still stick up their stones and artefacts. I was as brash a newcomer to it, and yet when I first felt the rhythm of its streets and smelled its ancient smells, and listened at night to the music of its many fountains, I said, ‘Of course’, for I was once more in my own place, an invader of what was already mine.

Depending upon one’s vocabulary, it is facile enough to speak of karma or atavism or even extrasensory memory. For me, there was no need to draw on this well of casual semantics, to recognise Aix from my own invisible map of it. I already knew where I was.

I had been conditioned to this acceptance by a stay in another old town on the northward Roman road, when I was younger and perhaps more vulnerable. I lived for some time in Dijon in my twenties, and compulsively I return to it when I can, never with real gratification. And I dream occasionally of it, and while the dream-streets are not quite the same as in waking life (the Rue de la Liberté swings to the right toward the railroad yards instead of going fairly straight to the Place d’Armes and the Ducal Palace, for instance, but I always know exactly where I am going), still I am a remote but easy visitor, happier as such than as a visible one.

I do not, in my imagination, feel as easy there as in Aix. I have long since made my own map of Dijon, and it is intrinsic to my being, but the one of Aix is better, a refuge from any sounds but its own, a harbour from any streets but its own: great upheavals and riots and pillages and invasions and liberations and all the ageless turmoil of an old place.

I feel somewhat like a cobweb there. I do not bother anyone. I do not even wisp myself across a face, or catch in the hair of a passerby, because I have been there before, and will be again, on my own map.

I can walk the same streets, and make my own history from them, as I once did in a lesser but still structural way in Dijon, my first return to the past, forever present to me.

The town was put on its feet by a Roman whose elegant bathing place still splutters out waters, tepid to hot and slightly stinking, for a ceaseless genteel flow of ancient countesses and their consorts and a quiet dogged procession of arthritic postal clerks and Swiss bankers and English spinsters suffering from indefinable malaises usually attributed to either their native climates or their equally native diets. This spa, more ancient than anyone who could possibly stay in it except perhaps I myself, is at the edge of the Old Town, at the head of the Cours Sextius, and more than one good writer has generated his own acid to etch its strange watery attraction.

Countless poems have been written too, in wine rather than acid, and countless pictures have been painted, about the healing waters and the ever-flowing fountains of the place. They will continue as long as does man, and the delicate iron balconies will cling to the rose-yellow walls, and if anyone else, from 200 B.C. to now, ever marked the same places on the map, in acid or wine or even tears, his reasons would not be mine. That is why Aix is what it is. 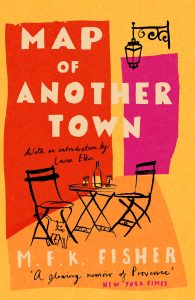 Map of Another Town