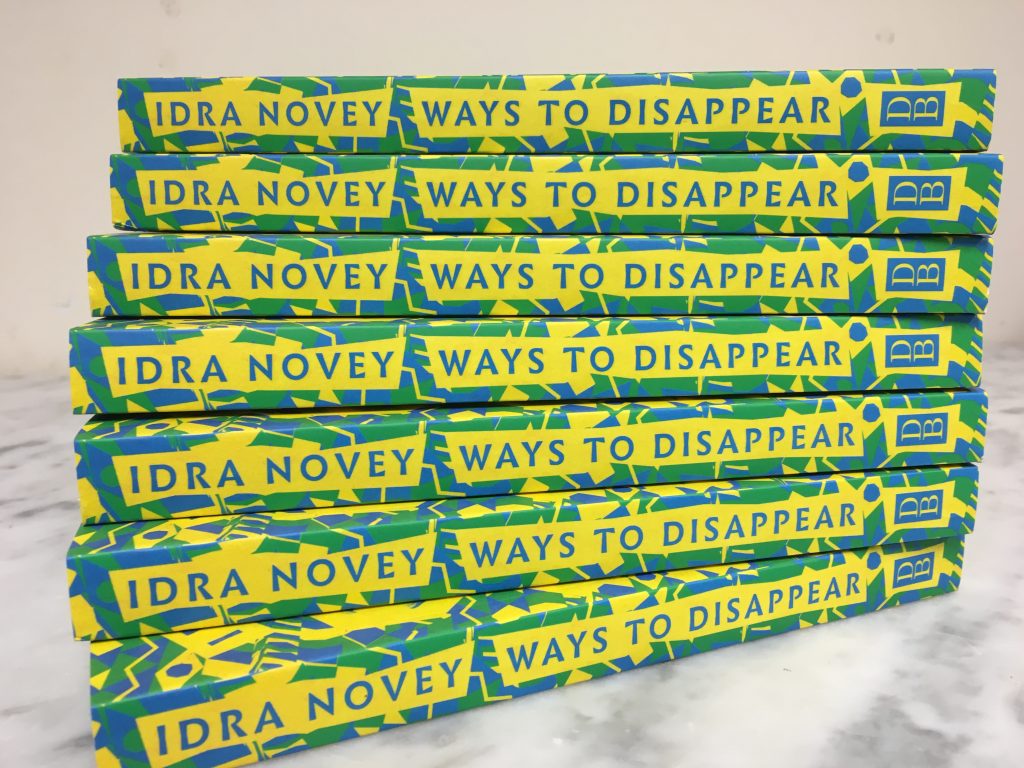 Idra Novey, author of Ways to Disappear, was interviewed on the Guardian Books Podcast. Listen to the episode here.

Novey discussed disappearances, Brazil, and her compulsively readable debut novel Ways to Disappear which is on sale now – in bookshops and on our site.

Take a look at the opening of the book below if you can’t wait to start reading.

IN A CRUMBLING PARK IN THE CRUMBLING BACK END of Copacabana, a woman stopped under an almond tree with a suitcase and a cigar. She was a round woman with a knob of gray hair pinned at the nape of her neck. After staring for a minute up into the tree, she bit into her cigar, lifted her suitcase onto the lowest branch, and climbed up after it.
Would you look at that, one of the domino players in the park said as the woman climbed higher, exposing the frayed elastic of her cotton underwear and the dimpled undersides of her thighs.
The domino players were about to break for lunch but didn’t think it was right to leave a woman sitting in an almond tree with a cigar and a suitcase. Julio, the ladies’ man, was selected to investigate. To prepare for the task, he gave a pinch to the tips of his moustache and checked the alignment of his suspenders. At the base of the tree, he looked up and found the woman’s ample behind looming directly over his head. To see the rest of her, he had to shuffle over a step and saw that she had opened a book across her lap as if she were sitting at a train station.
Senhora, could I be of assistance? he asked.
The woman thanked him for inquiring but said she’d been looking forward to this day for some time and was perched there so serenely with her open book and cigar that Julio wished her well and went home for some beans.

Over rice and beans in front of the TV, the Portuguese translator Emma Neufeld told her boyfriend that she was nervous. Her author hadn’t answered her emails in over a week.
Miles told her she spent too much time fretting over unanswered emails. His preferred subject of late was when they might get married, and whether they had to invite everyone in their Road Runners group. He said he was leaning toward an outside venue regardless.
Emma, on the other hand, was leaning toward never.
She had yet to express this.
That evening, an email finally arrived from Brazil but it was not from Beatriz. The sender said his name was Flamenguinho. Was Senhora Neufeld aware, the man inquired, that her author had recently climbed into an almond tree with a suitcase and hadn’t been seen in the five days since then?
Emma drew closer to the screen to make sure she’d read the message correctly. She murmured the words in Portuguese for almond tree and suitcase. For author and disappear. On the shelf in front of her stood the five works of translation that had consumed her life since graduate school. She’d finished one after another with the intensity of an addict. No other translator, in any language, had published as many works by Beatriz.
Downstairs, Miles had begun the nightly preparations for their early run tomorrow. She heard the thump of their sneakers as he placed them by the door, the clink of her keys as he positioned them beside her banana. To leave a person capable of such meticulous devotion was difficult.
She clicked to the weather. Outside their rented, somewhat shabby house in Pittsburgh, it was snowing sideways. In Rio de Janeiro, it was 106 degrees.