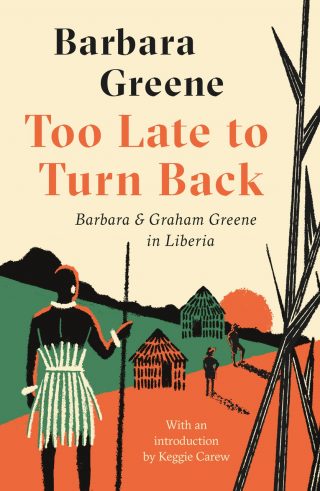 Barbara and Graham Greene in Liberia

with a foreword by Keggie Carew

It had been Graham Greene’s idea to explore tropical West Africa.

The map of Liberia was virtually blank, the interior marked ‘cannibals’. It was a far cry from the literary London of 1935, and the result of the 350-mile trek was the masterclass in travel writing that is Journey Without Maps. But the gifted author was not travelling alone. His young cousin Barbara had, over perhaps a little too much champagne, rashly agreed to go with him. Unbeknown to him, she also took up pen and paper on their long and arduous journey.

Too Late to Turn Back is the amusing, mock-heroic and richly evocative adventure of a young woman who set out from the world of Saki and the Savoy Grill armed only with a cheery stoicism and an eye for an anecdote. From her exasperation at her cousin’s refusal to pull his socks up to her concern over his alarmingly close scrape with death, from her yearning for smoked salmon to the missionary who kept a pet cobra, what emerges is a surprisingly refreshing and charming travelogue of comic misadventure, fizzing with good humour and colourful detail.

‘Few journeys have been so well recorded.’ Paul Theroux

‘Too Late to Turn Back could absolutely have stood alone as an illuminating and informative account of this tour through unknown territory. That it also provides an intimate observation of one of the most famous British writers of the twentieth century is the icing on the cake.’ Lucy Scholes, The Paris Review