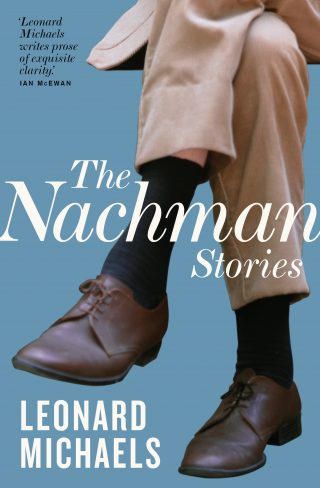 With an introduction by David Bezmozgis

He played the violin and he solved problems in mathematics. His need for ecstasy was abundantly satisfied.

Raphael Nachman is a solitary, self-deprecating, aging mathematician whose sensual needs are fulfilled by working out maths problems, playing the violin, and betting on racehorses. Unbound from romantic entanglements and parental duties, Nachman is free to focus on work and contemplating the moral condition.

From communist Cracow where Nachman tries to determine if his female guide is a government spy, to a barbershop in Santa Monica where he uses his unwitting hairdresser as a therapist, Leonard Michaels gives us glimpses of this esoteric and endearing man during the seemingly inconsequential moments which make up a life.

The last thing Michaels wrote before his death, The Nachman Stories showcases a masterful style, infused with a grace and wisdom. Each story is delightful and profound – presenting us with a befuddling, comical, and all-too-recognizable portrait of humanity.

‘Anyone concerned with the American short story should read and know these stories.’ – San Francisco Chronicle

‘Among the few essential American short story writers of the past half-century.’ – Nation

‘These stories are terrific, wonderfully written, shot through with an enigmatic, elusive sense of mystery.’ – The Millions