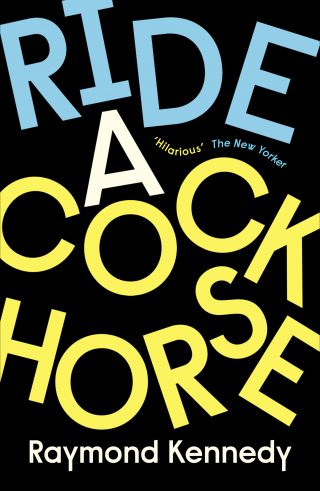 ‘Looking back, Mrs Fitzgibbons could not recall which of the major changes in her life had come about first, the discovery that she possessed a gift for persuasive speech, or the sudden quickening of her libido.’

Forty-five-year-old Frances Fitzgibbons is a loan officer at a New England bank, known for her polite discretion and kindly, tolerant disposition. Suddenly she transforms almost overnight: seducing a high-school student, usurping her boss as vice president, and firing anyone who crosses her.

Once Frankie has found her voice – which arrives fully-formed, without hesitation or thought – resistance is futile. It’s not long before she has a gang of devoted acolytes, including her hairdresser and son-in-law, and her plans to obliterate the competition can run unchecked.

First published in 1990 and set against the financial crisis of 1987, Ride a Cockhorse is a rollicking cautionary tale brimful with snappy dialogue and gleeful obscenity – and an irresistibly compelling antiheroine.

‘She is, clearly, monstrous and manipulative, enjoying an almost sexual thrill when she fires people or makes them subservient to her will; but she sure as hell lights the story up (she is the story, of course) and we are, naturally, goggle-eyed to see what she’ll get up to next.’ – Guardian

‘Ride a Cockhorse is at once high comedy and a mordant account of the paranoid personality . . . The best comic novel to come my way in a long time.’ –Washington Post