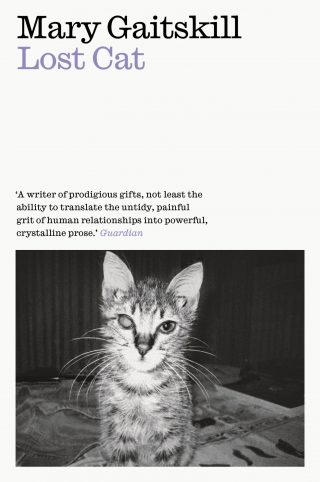 ‘Last year I lost my cat Gattino. He was very young, at seven months barely an adolescent. He is probably dead but I don’t know for certain.’

So begins Mary Gaitskill’s stunning book-length essay, the closest thing she has written to a memoir. Lost Cat begins with the story of how Gaitskill rescued a stray cat in Italy and brought him to live with her in the US, where he went missing.

As she explores the unexpected trauma of her loss, Gaitskill describes how she came to foster two siblings, Caesar and Natalia, a pair of inner-city children who spent summers and holidays with Gaitskill and her husband. The joys and ultimate difficulties of this relationship leads to a searing examination of loss, love, safety and fear. Gaitskill applies her razor-sharp writing to her most personal subjects yet.

‘Gatiskill’s self-portrait feels resolutely honest rather than flattering…But what she describes – the relentless human hope that love can fix what has gone before – can be recognised by us all.’ – Times

‘An arresting meditation on the nature of love.’ – Observer

‘The book delivers a fierce emotional punch. Gaitskill is unsentimental yet insightful about the complexities and contradictions of human emotion.’ – i news

‘A beautifully paced treatise on the human need for love . . . Lost Cat is a treasure trove of insight.’ – Irish Times

‘[This] short, sharp memoir is an impactful exploration of loss.’ –  Monocle

‘I really admire how Mary Gaitskill is willing to think about the problematic with complexity and humanity.’ – Eimear McBride

‘Stubbornly original, with a sort of rhythm and fine moments that flatten you out when you don’t expect it.’ – Alice Munro

‘Gaitskill is phenomenally gifted at the metaphysical microcosmic. She makes the abstruse world clearer.’ – Guardian