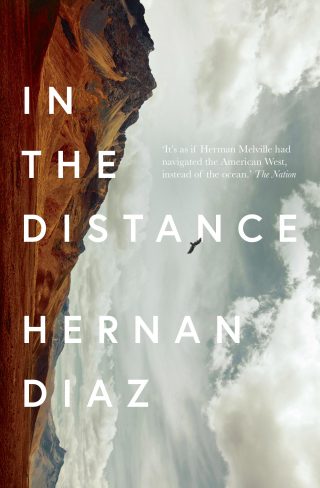 Finalist for the 2018 Pulitzer Prize for Fiction.

Håkan Söderström is a man who has become a legend. Giant in size, rumoured to be bloodthirsty and fearless, he is known simply as ‘the Hawk’.

But behind this myth is a tale of loss and survival. As a young man Håkan is sent from Gothenburg with his brother Linus to seek their fortunes in New York. In the chaos of the port, he is separated from Linus and finds himself instead on a ship bound for California. He speaks no English and has no money but determined to find his brother, Håkan sets out on a journey east. As he travels on foot he moves against the tide of history, experiencing the Gold Rush and its effects, encountering capitalists and colonialists, explorers and early scientists, and witnessing the formation of America and the betrayal of its dream.

In the Distance is a novel about radical foreignness – about being lost in a country that does not yet exist. As Håkan confronts desert and mountains, he is thrown between the threat of violence and devastating loneliness, all the while keeping the image of his brother, and the hope of companionship, in the distance.

‘A brutal, sad, tender coming-of-age story, set in a historical past that feels both familiar and at the same time like nothing we’ve ever encountered before.’ – Guardian

‘An extraordinary epic tale of a lone man’s journey into the heart of the American frontier.’ – Financial Times

‘Like Huckleberry Finn written by Cormac McCarthy: an adventure story as well as a meditation on the meaning of home.’ – Sunday Times

‘Exquisite: assured, moving and masterful, as profound and precise an evocation of loneliness as any book I’ve ever read.’ – Lauren Groff, author of Fates and Furies

‘A gritty, dreamy anti-western western… Surreal, cerebral, and affecting beyond what I thought possible.’ — LitHub

‘With echoes of John Williams’s Butcher’s Crossing, Andrey Platonov’s Soul, and Richard Hughes’s A High Wind in Jamaica, this is fiction at its finest propulsive, unsettling, wildly ambitious.’ —  Paul Yoon, author of The Mountain

‘Brilliant… This suspenseful novel is a potent depiction of loneliness, a memorable immigration narrative, and a canny reinvention of the old-school western.’— Publishers Weekly

‘It’s as if Herman Melville had navigated the American West, instead of the ocean.’ — The Nation