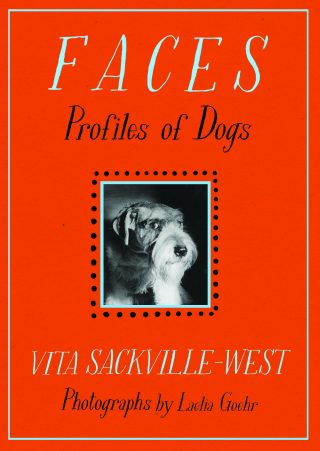 ‘It must be a nuisance to go through life with a Father Christmas moustache like that, but no doubt the Schnauzer gets used to it.’

In Faces, Vita Sackville-West traces the origins and history of forty-four dog breeds, reflecting on their characteristics with frank humour, from the silky gentle-eyed Afghan, ‘like somebody’s elderly Aunt Lavinia, who nourishes a secret passion for the Vicar’, to the Labrador Retriever, ‘dear, solid, faithful lump of a dog!’, and that ‘docile minion’ the Corgi.

First published in 1961, each profile is accompanied by Laelia Goehr’s striking black and white photographs. Together, profile and portrait capture these canine characters in their various moods: benevolent, haughty, amused, wistful, or simply a little bit sleepy.

Charming and fascinating in equal measure, Faces is a joyful read for all dog lovers.

Laelia Goehr (1908-2004) was born in Kiev, Russia. As a child she studied piano at the Conservatoire and gave her first public performance at the age of 10. After moving to the UK, Goehr studied photography under Bill Brandt. She published three books: Faces with text by Vita Sackville-West, Musicians in Camera with text by John Amis and A Little Tiger with text by Elspeth Huxley. Her photos have been exhibited over the world, and are held in collections including the Victoria & Albert Museum and the National Portrait Gallery. More information about Laelia Goehr’s work can be found at laeliagoehr.com.

‘Charming . . . a worthy tribute to the miraculous trueness of the species without which the human race would be incomparably gloomier.’ — The Times

‘A hilarious history of 44 breeds.’ — Guardian

‘A must for all lovers of the hound.’ — Marie Claire