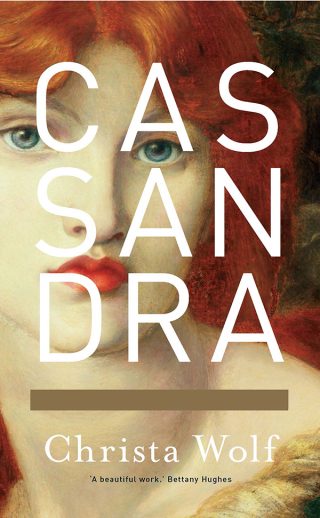 Translated from the German by Jan Van Heurck

Cassandra, daughter of the King of Troy, is endowed with the gift of prophecy but fated never to be believed. After ten years of war, Troy has fallen to the Greeks, and Cassandra is now a prisoner, shackled outside the gates of Agamemnon’s Mycenae. Through memories of her childhood and reflections on the long years of conflict, Cassandra pieces together the fall of her city. From a woman living in an age of heroes, here is the untold personal story overshadowed by the battlefield triumphs of Achilles and Hector.

This stunning reimagining of the Trojan War is a rich and vivid portrayal of the great tragedy that continues to echo throughout history.

‘Cassandra is fierce and feverish poetry that engages with the ancient stories while also charting its own path. Filled with passionate and startling insight into human nature.’ – Madeline Miller, author of The Song of Achilles

‘Christa Wolf wrote books that crossed and overcame the divide of East and West, books that have lasted: the great, allegorical novels.’ – Günter Grass

‘A sensitive writer of the purest water – an East German Virginia Woolf.’ – Guardian

‘One of the most prominent and controversial novelists of her generation.’ – New York Review of Books