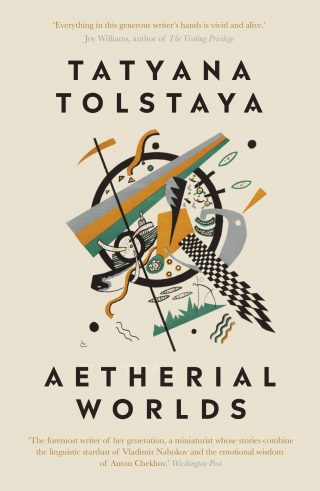 Translated from the Russian by Anya Migdal

‘Everything in this generous writer’s hands is vivid and alive.’ – Joy Williams

From one of contemporary Russia’s finest writers, a spellbinding collection of eighteen stories, her first to be translated into English in more than twenty years. Tolstaya’s ecstatic, witty and witchy imagination is in full force in autobiographical stories of delivering telegrams in Soviet Russia, conducting an affair with a man who may or may not exist, imagining a world without Italy (‘Nothing, nothing exists – there is no pasta, no Fellini, no pizza…) and, in the central story, recounting memories of summers spent in the family dacha and a time lost forever.  Beginning in Soviet Russia and setting off across the globe from Italy to France, Crete to America, this is a masterful collection by a brilliantly original writer.

‘[Tolstaya] doesn’t need to dabble in the surreal to make the past seem like a dream.’ The Guardian

‘Both anti-nostalgic and romantic, it taps into her wider work which often explores the realities of Russia’s post-Soviet society.’ Stylist, Best Microfiction by Women

‘The foremost writer of her generation, a miniaturist whose stories combine the linguistic stardust of Vladimir Nabokov and the emotional wisdom of Anton Chekhov.’ Washington Post

‘Playful and poetic…Shows this foxy, original writer at her most sublime.’ Wall Street Journal

‘An enchantress.’ Edna O’Brien, author of The Little Red Chairs

‘Grimly hilarious … Everything in this generous writer’s hands is vivid and alive… It’s all sublime… She has been compared to Chekhov. Absurd…Tolstaya barrels by him and knocks him in the ditch.’ Joy Williams, author of The Visiting Privilege