Scholastique Mukasonga was born in Rwanda in 1956. She settled in France in 1992, only two years before the brutal genocide of the Tutsi swept through Rwanda. In the aftermath, Mukasonga learned that thirty-seven of her family members had been massacred. Mukasonga has won many prizes, for individual books and for the body of her work. Among those for the latter are the Simone de Beauvoir Prize for Women’s Freedom, an American Academy of Arts and Letters award and the Seligmann Prize from the Chancellery of the University of Paris. Her other books include: her debut novel Our Lady of the Nile, which was a Dublin Literary Award finalist and won, among other prizes, the Ahamadou Kouroma and the Renaudot; Cockroaches (chosen by the New York Times as one of the fifty best autobiographical stories of the last fifty years) and Igifu. The Barefoot Woman was a National Book Award finalist. Her stories are regularly published in the New Yorker. 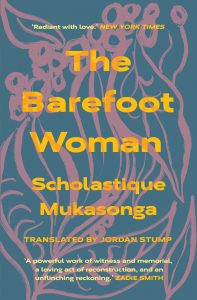