A BROKEN MIRROR by Merce Rodoreda

‘Rodoreda has bedazzled me by the sensuality with which she reveals things within the atmosphere of her novels.’ –Gabriel García Márquez

One morning, two or three weeks later, Teresa left home rather early. For the last couple of days her husband had been afflicted with a bad cold. She was going to see her dressmaker, she told him, but wouldn’t take the carriage because she felt like walking and breathing fresh air. She’d been closed in with germs and eucalyptus vapours for two days now. Would it be all right if she wore the brooch? She wanted to stun her dressmaker. That pin, as Senyor Begú had said, would testify to the worth of any man. ‘People who see me won’t think, what a fine lady! But, rather, what a fine gentleman!’ From his bed he forced a laugh. Teresa was a pearl. He had first seen her as she walked by with a girlfriend while he was on the terrace of the Liceu. Her mother ran a fish stall at the Boqueria market. Teresa had explained that to him right away on that day when she had been out alone and he followed her for a while and then asked if he could walk with her. After that they saw each other a few times. That winter Teresa’s mother died. She hadn’t been buried a month when Senyor Nicolau asked Teresa to marry him: all he could offer her was his fortune; he knew very well that he was old and that no girl could fall in love with him. Teresa said she’d think about it. She had a big problem: an eleven-month-old son, a slip-up the size of a house. The father’s name was Miquel Masdéu; he was married and earned his living, among other things, turning streetlights on and off, but he was a knockout. As soon as Senyor Nicolau asked her to marry him, Teresa hid her son at an aunt’s, and after a few days she said yes. ‘And to hell with the fish stall!’ It seemed all that had happened a long time ago, when in reality it was quite recent. 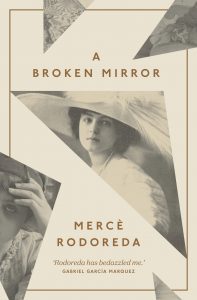